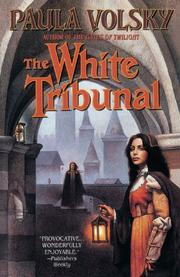 In Volsky's new fantasy (The Gates of Twilight, 1996, etc.), the city of Lis Folaze in Upper Hetzia is slowly recovering from the Sortilegious Wars (though we never find out what these involved). But now the city trembles in fear of Gnaus liGurvohl's White Tribunal, an inquisition that supposedly exists to root out sorcery but actually seeks to condemn rich families and expropriate their wealth—as young Tradain liMarchborg soon understands when his father and brothers, though entirely innocent, are accused, tortured, and ``disinfected.'' Tradain himself is incarcerated in the ghastly Fortress Nul, where he languishes for 13 years before a prison riot enables him to escape. He hides in the ruined mansion of the sorcerer Yurune and decides to sell his soul to the puissant other-dimensional entity Xyleel in return for sorcerous powers enough to destroy his enemies. He also finds his childhood friend Glennian, her family likewise expunged by liGurvohl, clandestinely leading the political resistance to the Tribunal. Tradain eventually triumphs, though he finds the achievement curiously unsatisfying and prepares to surrender to Xyleel. Unexpectedly, Glennian intervenes with Xyleel to plead for Tradain's life. Skimpy backdrop, thin plot, and characters by the numbers, not to mention the dreadfully feeble conclusion: some graphic tortures but otherwise unpersuasive.