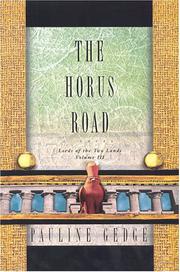 Vol. III of Lords of the Two Lands

The completion of the Lords of the Two Lands trilogy (after The Hippopotamus March and The Oasis, neither reviewed)—and the latest of Gedge’s (House of Illusions, 1995, etc.) excursions into Ancient Egypt. Like its predecessors, it’s essentially a tale of warlords: The tyrannical Pharaoh Apepa, whose Hyksos dynasty has occupied Egypt for 200 years, faces a mutiny of the Egyptian armies led by Ahmose, the youngest son of the fallen hero Prince Seqenenra Tao. Seriously wounded in an assassination attempt, however, Ahmose must go into hiding to plot his strategy against the Hyksos usurpers. While he’s recovering, the women of his family secretly rally the rebels and organize resistance to the Pharaoh and the “rulers of the uplands.” Eventually, the native princes, led by Ahmose, defeat the Hyksos, oust the Pharaoh, and restore to Egypt her true rulers and her ancient gods.

A good yarn, although the dialogue and plot can be about as lively as a sphinx at times.