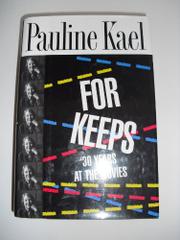 Thirty Years at the Movies

Think of this as the Riverside Shakespeare of longtime New Yorker film critic Kael's writing: It's not the complete works, but it's close. Kael (Movie Love, 1991, etc.) has been both celebrated and shunned for her reviews, largely because she cultivated her role as a polished outsider and thought quite highly of herself and her judgment. Her prose was always sharp, and the mixture of film literacy and gut reaction she brought to her criticism often confused readers who were on the verge of thinking they had her figured out. Kael has written some astonishing things; for example, she called Paul Newman's performance in Slapshot ``the role of his life—to date.'' That's the pleasure of a book like this: Nearly everything in it was written in the heat of the moment, and as a record of American popular culture it offers the eclectic reactions of one quirky intelligence.