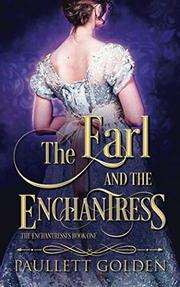 THE EARL AND THE ENCHANTRESS

From the Enchantress series, volume 1

Two wallflowers bond over books in this debut historical romance.

Lizbeth Trethow is a “determined spinster and future lady’s companion,” but the prospect of a love match changes her mind. Her charming courtship with Roddam begins in a library, where they’ve both sought refuge from a tiresome party. Their shared interest in books arouses Lizbeth’s intellect and sparks her desire, but she has trouble locating her mystery man once they part ways. After an unfortunate mix-up with him and his raffish cousin Drake, the duke of Annick, Lizbeth learns that her Mr. Roddam is actually Sebastian, the earl of Roddam. Her Aunt Hazel says the nobleman is a highly desirable match for a woman of her station, but Lizbeth won’t settle for a marriage of convenience. And Sebastian, who harbors a terrible secret from his childhood, fears emotional intimacy. When he discovers that he and Lizbeth both live in cities connected to King Arthur, Sebastian’s idol, she seems almost too good to be true. Even the frosty dowager duchess begrudgingly approves of her. The historical touches within each decadent ball, the allure of Sebastian’s castle restoration project, and the discussion of old books like Samuel Richardson’s Pamela when they were much newer enhance the 1790 setting. And the mystery of Sebastian’s haunted past lends intrigue to Golden’s series opener long after the couple say I do, expanding its scope. Meanwhile, Lizbeth’s sister, Charlotte, is willing to marry for status. That is, until she weds Drake and finds that she’s lonely. (He may be a rake, but his sense of humor makes him worthy of a second chance in the sequel.) Both romantic plotlines continue well beyond the initial happily-ever-after, offering unexpected twists and further character development. The author adds a few extra ingredients to the romantic formula, with pleasing results.

An engaging and unconventional love story.