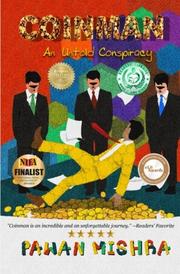 Mishra’s debut comic novel is an absurdist tale of office and personal politics set in a small town in northern India.

A clerk called Coinman can’t stop jingling the coins in his pocket. It’s a simple addiction, but it’s one that comes to rule his life. His real name is Kesar, but his lifelong habit earned him his nickname, and because he’s a bit of a shrinking violet, he accepted it. His obsession drives his work colleagues and his spouse a bit nuts. His wife, Imli, an actress who’s so obsessed with her craft that she becomes her characters at home, bans coins from the house. At the same time, his co-workers conspire in their own ways to rid themselves of Coinman’s constant jingling. One co-worker, Ratiram, poses as Coinman’s friend in order to ingratiate himself with his fellow employees. Another colleague, Hukum, has a penchant for bullying. They and their fellow workers love to get together to gossip, and their chief target is Coinman himself. It gets to the point where they start ganging up on him physically, which is a turning point in all their lives; it changes the office dynamic and sends a few people on unexpected paths. Things also change in Coinman’s relationships with his parents and Imli, and he soon decides that he must deal with his habit himself. Mishra takes the central motif of coin jingling to an extreme, and it wears thin at times, but it’s an effective stand-in for any personal problem that causes social friction. The author also has a good eye for offbeat, comic moments; for example, at one point, Imli, caught up in her role as a doctor in her latest play, shocks Coinman by giving him an injection in his behind. In another scene, Ratiram nearly convinces Coinman that he can solve his problems by growing a goatee. However, the prose has a strange cadence that sometimes makes it hard to parse its meaning; for example, when Coinman is attacked, Mishra writes, “As a result the coins sheepishly fell to the floor—old and new, outdated and in use, humiliated but still in the news.”

A funny, unusual read that rises above its more distracting elements.