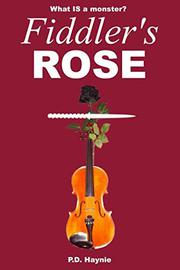 This novel presents a romantic adventure through a long-distance psychic conversation.

As the story opens, Rose is a 16-year-old runaway working on a ship who is regularly having sexual entanglements in her dreams with a unicorn named Fiddler. She learns that Fid is actually a ghost possessing a dagger belonging and bonded to the ship’s captain, Osprey, with whom he is also romantically involved. In time, Rose decides to move on from the ship to pursue new opportunities, leaving Fid behind. Five years later, she hears him calling to her in a dream once again. Osprey’s ship, the Sufferance, was attacked and he was killed. Fid’s dagger is lost somewhere at the bottom of the ocean, and he has been quite lonely. The two immediately pick up their mental connection. In the years the two friends were apart, Rose became a sorcerer and discovered that she had sea-dragon blood in her ancestry. Now, she is slowly becoming a dragon mage and embarks on a quest to find Fid. During her journey, she communicates with “crocodilians” (even learning how to turn into one), communes with the great sea turtle Maelstrom, and bounces from port to port as she attempts to pinpoint Fid’s location. Fid, as he waits on the ocean floor, regales her with stories about his past life, both when he was a living unicorn as well as after he became a ghost with a dagger. As Fid eschews the moral depravity of his past, Rose tries to decide whether to become an immortal herself by going full dragon. This hefty adventure is written entirely in dialogue, lending it a quality of oral storytelling rarely seen in a novel (“Fiddler sighed. ‘Unicorns are…fertility creatures. Sort of really minor fertility gods. We come on a herd of appropriate creatures—that usually means horses or cows or deer or sheep—and we impregnate every female in the herd that isn’t too old or too young or already pregnant’ ”). The unusual format may prove unappealing to those who like lush fantasy descriptions and intricate worldbuilding. But Haynie (A Brief History of Gnolls, 2015) manages to weave the backgrounds of his two intriguing conversationalists into their current escapade quite seamlessly. This imaginative love story with vivid sea creatures should appeal to fantasy fans seeking a change of pace.

An epic fantasy romance with strong characters and an inventive quest.