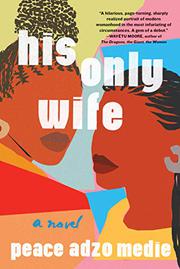 A Cinderella story set in Ghana.

“I think I would have been less apprehensive if Eli himself had been present.” Probably so, since this is Afi’s wedding and Elikem is the groom, whom she has barely met. This delightful debut novel from Medie, who was born in Liberia, educated in Ghana and the U.S., and teaches at the University of Bristol in England, is anything but academic. As it begins, Afi—gorgeous, talented at sewing, dirt poor, and very country—is being married in a traditional ceremony to an absent young man whose wealthy and powerful family, the Ganyos, will do anything to separate him from his Liberian mistress. An aging woman known as Aunty is the Don Corleone of the clan, obeyed and feared by all—or almost all. Her selection of Afi as designated daughter-in-law immediately improves the desperate straits of Afi’s widowed mother and a whole slew of other relatives, who begin receiving deliveries of rice and other supplies as part of her bride price. Eli’s brother, Richard, sets Afi up in a fancy apartment in Accra and his sister Yaya helps her enroll in fashion design school. Now…if only Eli would show up. By the time he does, Afi is so lonely and miserable that she might have fallen in love with him even if he weren’t incredibly good looking, generous, and sweet. Unfortunately, he is also completely unwilling to break things off with his other woman, who lives in his primary residence with their daughter. Medie subtly develops Afi’s character as she—mentored by her brother-in-law’s mistress, who lives down the hall—goes from being an innocent, awestruck village girl to a sophisticated, confident woman, accustomed to privilege and luxury, set on a creative career...and mad as hell. She gradually pieces together the scoop on her rival, who “moved to Ghana reluctantly, her cigarettes and booze clutched in one hand and her baby in the other” and now has Eli so wrapped around her little finger that she takes off on a solo vacation to Spain while he’s out of town on business. Afi deserves better. This is war.

A Crazy Rich Asians for West Africa, with a healthy splash of feminism.