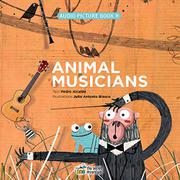 From gibbons who sing at dawn in Southeast Asian treetops to club-winged manakins who strum their feathers in the Andean mountain forests, from humpback whales in ocean depths to male St. Andrews Cross spiders crossing the webs of potential mates, animals of all sorts make musical sounds with various parts of their bodies. The author of this intriguing title is a Spanish composer, conductor, and musicologist whose understanding of music and musicianship opens a whole new window into the animal world. Presented as a series of imagined album notes, two successive double-page spreads introduce each animal in several short paragraphs (main text and callouts with additional interesting facts) about the musical performances, how they are made, and the different sounds the creature can make—its repertoire, as it were. “Production credits” include the concert title, venue, time, length, and purported composer; for the superb lyrebird, for instance, these are: “Rainforest Remix,” the Rainforest Disco Club, winter, 20 minutes, and DJ Lyrebird. Cartoonlike animal images printed on staff-paper backgrounds support the theme. The image of the imagined recording, shown, usually, as a 45rpm disc, will likely be meaningless to today’s readers, the translation has awkward moments, and the layout can be confusing, but readers who figure out the premise will find their ears opened to a new way of appreciating the natural world. Actual recordings of the animal songs will be available on the publisher’s website.

Slightly out of tune but worth a listen nonetheless.