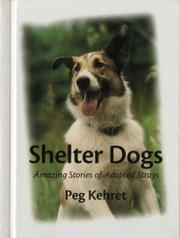 An amiable collection of short anecdotes about unwanted dogs who were dumped at animal shelters by their owners; Kehret (Small Steps, 1996, etc.) tells of eight strays who were subsequently adopted and accomplished great things. Tracker, who “began life unwanted and unloved, as do far too many puppies,” went on to become a movie star. Kirby’s owner died and snapped and snarled at everyone; he was about to be euthanatized when a shelter worker said softly, “Hey, Kirby. Want to go for a walk?” and the dog’s personality changed; he recognized the invitation and forever after was a loving dog. Joey was trained as a “service dog” by her owner, who has multiple sclerosis; Joey performs such tasks as picking up dropped items, opening doors and cupboards, and helping her owner’s mobility. The most amazing story dog is Bridgette, who was able to predict, by picking up “subtle shifts in body odor and electromagnetic fields,” when someone was going to have a seizure. This allowed her owner to lay down before a seizure. The hoards of dog-lovers out there will not find these incidents astonishing, but vindication, so there’s a ready audience to cry over and gasp at the tale behind every dog. (b&w photos, notes) (Nonfiction. 10-14)