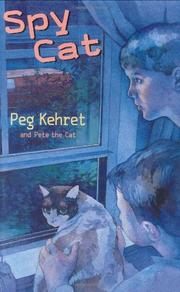 by Peg Kehret & Pete the Cat

As in a previous outing (The Stranger Next Door, 2001), “co-written” with this collaborator—her own pet—Kehret delivers an exciting, suspenseful thriller that satisfies on several levels, thanks in no small part to the inherent literary talent of said feline and the juicy role in which he cast himself in the drama. Pete’s not only a distinguished author, but as a key player he’s a spy of rare talent whose actions and “words” are rendered in italics throughout the narrative to distinguish his activities from those of his human coauthor and fictional foils. A rash of robberies has been perpetrated in a small town in which Pete the Character lives with his family. Benjie Kendrill, younger brother of Pete’s owner, Alex, imagines himself a master spy and sets out to hunt down clues to the crimes. Exciting events ensue, including the inevitable robbery of the Kendrills’ own home and the kidnapping of Benjie after he unwittingly gives himself and his store of knowledge away to the thieves. He’s one smart, brave, and resourceful kid, though; along the way he picks up enough clues to nail these burglars to the wall. Pete is the cat’s meow as he goes above and beyond to save Benjie and to lead the less-clever humans (who don’t understand his “English”) to the solution of the crimes and Benjie’s successful rescue. Readers will keep turning the pages, though Benjie’s harrowing experiences as a captive might frighten very sensitive youngsters. Kehret manages to include in her satisfying story humor, commentary about kindness to animals, and the importance of family and friends. (Fiction. 10-12)