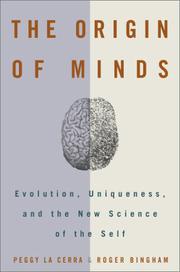 THE ORIGIN OF MINDS

Evolution, Uniqueness, and the New Science of the Self

Psychologist La Cerra and biologist Bingham unfold their version of what makes us unique.

“Unfold” is the word, since their approach is developmental. A baby is neither a tabula rasa nor a full-fledged persona but engaged in survival using instinct, sensory experience, and feedback. In this, babies are hardly different from bacteria, whose more primitive “minds” enable them to move toward food or tumble randomly, or from bees, coding color, shape, and scent to record which flowers are best. Now comes the jargon: thus individuals build “adaptive representational networks” (ARNS), which include the mental “snapshot” of a particular behavior associated with a successful outcome (raid fridge, satisfy hunger). Intersecting these myriad ARNS are Life History Regulatory Systems—your part genetic, part environmentally induced life stages—childhood to adolescence to reproductive years, and beyond. Since everyone’s experiences are unique, the self is unique, and the invoking of chance, environmental vagaries, language, and learning are both hope and guarantee that the self can be re-calibrated—made over by changing the inputs (as in AA and other 12-step programs). There is even a suggestion that some serious affective states such as depression and manic-depression are ways of re-calibrating—a kind of coping mechanism that unfortunately goes too far. By the end, though, one senses that this constructivist approach—a bootstrap building of the self—is too pat. There is more to human behavior than ARNS, LHRS’s, and “behavioral intelligence.” And while the arguments here to counter the dogmas of evolutionary psychology are sound, the authors’ claims that their new theory of the self shares some of the best insights of Freud, Skinner, and Maslow seem like so much back-patting.

So, smart steps in the right direction, good cross-species comparisons, but a way to go.