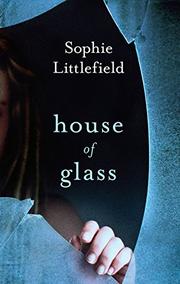 Littlefield (Garden of Stones, 2013, etc.) draws facts from a true crime to create a novel about vicious intruders who invade an upper-class family’s home in Calumet, Minn.

Jen and Ted Glass appear to have the perfect life: They live in a big house in a nice neighborhood where Jen volunteers at her children’s schools, attends Zumba classes and occasionally has a girls’ night out with her friends. But Ted was laid off from his job as a global management executive six months ago, and he’s yet to find a new position. Jen’s tried to be patient, but she’s become suspicious of Ted’s frequent absences and lack of results, and they often find themselves arguing. Adding to the tension is the sullen behavior of 15-year-old Livvy, who’s involved in an ongoing rivalry with her ex-boyfriend’s new love interest, and 4-year-old son Teddy’s selective mutism. When two intruders invade their home, lock the family in the basement, ransack their house and force Jen to go to the bank the next day to empty their accounts, Jen and Ted assume the men will take the loot and the family’s valuables and leave. However, the criminals remain in their home while Jen is forced to access other investments. When the older thug, Dan, drops nuggets of information about the family that only an insider would know, Jen (who’s also having disturbing dreams) suspects their captivity is more than just a random occurrence. Dan’s partner, Ryan, worries the couple even more with his instability and increasing interest in Livvy, who defies the brutes. Knowing he must take a stand, Ted takes heroic actions to save his family. Littleton pens a mechanically sound narrative by altering the family structure and adding her own twists to elements of the source material. But readers who recall the brutal attack suffered by a Connecticut family in 2007—and who empathize with family members and the lone survivor who must cope with very genuine memories every single day—may find it difficult to cast aside the true story and embrace the author’s fictionalized version.

While a solidly constructed book, certain headlines deserve respect and distance, and some may consider Littleton’s account exploitative.

THAT'S WHAT FRENEMIES ARE FOR
by Sophie Littlefield
Fiction

A BAD DAY FOR MERCY
by Sophie Littlefield
Mystery

A BAD DAY FOR SCANDAL
by Sophie Littlefield
Mystery

A BAD DAY FOR PRETTY
by Sophie Littlefield
Fiction

A BAD DAY FOR SORRY
by Sophie Littlefield