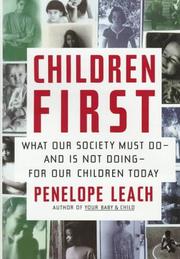 Branded with the emphatic subtitle ``What our society must do- -and is not doing—for our children today,'' this bridge-burning work by the author of such respected parenting titles as Your Baby & Child, Babyhood, and The First Six Months is radical and provocative in its outlook for family and state. The premise, like the title, is simple: make children's needs the priority in most or all instances of decision-making, from the personal to the political (let children go first in lines at public bathrooms; legislate direct public funding of daycare Ö la Sweden's model). Lively and ever-specific, Leach provides pertinent discourse on: a sweeping redirection of a capitalist system that requires people to commute long distances, an make other sacrifices, in the name of ``materialistic'' needs; the importance of breast-feeding in a primordially nurturing environment (Norway's working mothers are allowed flexible hours and days for this activity); the reinstitution of neighborhood meeting places and cafes to make the burgeoning work-at-home (near the children) force feel less isolated. Admirably comprehensive and apparently unwilling to hedge, Leach is prone to bald or oversimplified statements (particularly on grand-scale socioeconomic restructuring), but she is ultimately more friend than foe to parents and their children; her sympathetic tone soothes even while her call to change is alarming. Not for the underconfident: the dos and don'ts may paralyze some. Still, if only half the Clinton health-care revolution is realized, why can't ``children first'' be the next frontier? Leach either has bitten off more than she—or we—can chew, or is simply wise beyond our era. Mild reservations aside, this is valiant and worthy and should have quite a following. (First printing of 75,000)