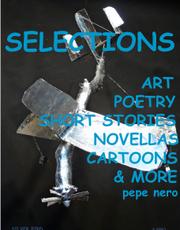 A miscellaneous anthology of poems, drawings and stories.

Nero (Poems without Titles, 2010) fills this large volume with a broad selection of examples from the various forms in which he works. It contains dozens of free-form, mostly impressionistic verses of an extremely idiosyncratic nature—linguistically playful but possessing nothing else of poetic value. Interspersed among these are many of the author’s cartoons, which generally follow the same whimsical style, with clever puns, mismatched metaphors and wordplay in titles such as, “A Community of Crows Cussing” or “Malinda’s Mattress Makes Music.” The real meat of the anthology, however, are Nero’s short stories, which range from single-page vignettes (“The Old Man”) to far longer, more ambitious minidramas (“Vito’s Big Score”). They often reflect a wry, slightly world-weary view of life, which clings to a ragged kind of courage against all odds. In “A Special Place,” for example, the devil tempts an aspiring writer, who reflects on the embattled nature of human life: “Some are born blessed, others must reach out, fall to their knees, beg the lord, light candles, consult witches, sorcerers and magi,” he observes. “When all else fails, they must make the final attempt at the last hope for greatness.” Some stories are taut and angry, such as “Chiazzo,” about a dog trained to hate military uniforms, and some are looser and more idea-driven, such as “Runners in the Night,” in which six hobos testily debate the nature of time and reality. The short story “Gil” is the collection’s high point. In it, the narrator, Pepe, shares a beer with the real-life postmodern novelist Gilbert Sorrentino, who recounts, among other things, the fallout from his 1971 novel Imaginative Qualities of Actual Things. The two men sit at the bar and quickly come to know and like each other, and Nero renders the whole scene with an appealing naturalness. Overall, these short stories are the real attraction of this volume and make for some excellent reading.

An intriguing, if uneven, collection of one author’s varied creative output.