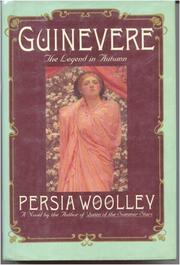 The Legend in Autumn

In this last of Woolley's Arthurian trilogy, Queen Guinevere witnesses the crumbling of the kingdom and knightly brotherhood at Camelot, loses husband and lover, and, though committed to the Mother Goddess and the Old Ways, lives out her days in a Christian convent. Again, as in Child of the Northern Spring 1987) and Queen of the Summer Stars (1990), the old legends are bleached free of that ancient tingly magic, and the dialogue is entertainingly anachronistic (Guinevere on the Holy Grail quest: ``Frankly, I think it's a dreadful idea''). Still, the author has corralled most of the Arthurain heroes—from the Green Knight to the string of G's (Gawain, Gareth, Gahert, Geraint, and Galahad). Narrated by Guinevere (who reports events with the efficient dispatch of a Mary Kay section manager), the story begins in her prison cell; she's scheduled for execution in the morning. By 400 pages later, just why she's in the pokey is revealed and the past few years reviewed: her marriage to Arthur (a union of affection and mutual respect); her platonic affair with Lancelot, the Queen's Champion and the greatest knight, ending in a bittersweet consummation; the ``spiritual'' quest for the Grail, embraced most fervently by Galahad, Lancelot's son by Elaine-not-so-pure; the disastrous relationship between Arthur and Modred, his son by his half-sister; the plots of Morgan, another sister and priestess Lady of the Lake; the clash of Christian and pagan religions. There is much travel and travail, tournaments and tilts of will, deaths and panting messengers. Arthurian tales in a chatty modern idiom, with old buddies like ``Lance'' and ``Tris'' and ``Guin'' doing their still- marvelous stuff.