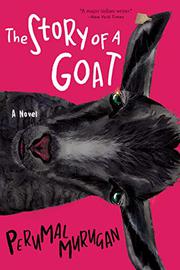 THE STORY OF A GOAT

A goat’s life serves as an allegory for the human condition in this novel from an acclaimed Indian author (One Part Woman, 2018, etc.).

Poonachi, the goat of the title, arrives the way characters often do in fairy tales: strangely, under circumstances fraught with portent. She’s presented to an old man in a drought-stricken Indian village by a “giant” who needs “someone who will look after her properly.” The goat is feeble and the old man’s family is poor, but he and his wife nurse her with care. Still, life is always at least somewhat unstable: The government is nosy about Poonachi's provenance, other goats treat her like an outcast, and a wildcat abducts and nearly kills her. Fighting her way to survival only frees her to more sophisticated disappointments, including lost children and thwarted romance; Murugan deftly sketches out a nanny-meets-billy, nanny-loses-billy scenario that’s as affecting as many human tales of unrequited love. Which is the point: In anthropomorphizing Poonachi, Murugan finds a path to describe the essence of humans’ struggle to survive while grasping for fleeting moments of joy and grace. Murugan can be openly comic about this, as when he satirizes the endless bureaucratic lines goats and their keepers endure. But he’s mostly straight-faced, in the tradition of George Orwell’s Animal Farm, a similar allegorical tale; translator Raman notes the connection to the classic, and, as with Orwell, the story is straightforward as a fable while open to interpretation. In its closing pages, the novel returns to its more mystical roots, and while it gives nothing away to say that the story is ultimately tragic—from the start, Poonachi's life is a study in precariousness—Murugan subtly pays tribute to our capacity to stubbornly endure under the most difficult circumstances.