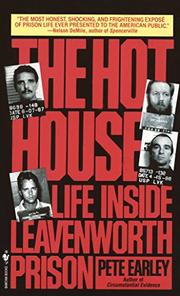 Searing, compelling eyewitness account of the men--inmates and guards--of Leavenworth Prison. The Bureau of Prisons gave Earley (Family of Spies, 1988) unprecedented permission to come and go as he pleased and talk to any inmate without guards present. Earley's end of the deal: he would have no protection. His chronicle concentrates on five prisoners, the new warden, and several guards. Meet Carl Cletus Bowles, three life sentences: paroled in 1965, he robbed a bank, kidnapped the California state controller general, his wife, and their small child, stole several cars, held six other people hostage, and murdered an Oregon policeman. What goes on in the mind of a man like that? Earley spent two years talking to him. Meet Lieutenant Phillip Shoats, head guard of 719 Marielistas. He was a tough guy who could make the Cubans walk a chalk line while reports of his brutality were suppressed. Then he was blown away by a shotgun wielded by his 14-year-old son, desperate after the beatings Shoats was giving him, his brother, and mother. Did Leavenworth brutalize Shoats or was it the terrible secret he wouldn't tell his wife, revealed only at his death? In the pen there are only two emotions: fear and rage. Here is where a man ""runs the gears"" on the man in the next cell for playing his radio too loud (""You slam a shank into his chest and then pull up and over and then down and over, just like shifting gears on a car""). Here is the stronghold of the predatory gang--the Aryan Brotherhood--that specializes in protection, extortion, and narcotics. To join, one must ""earn his bones"" by murdering someone. Earley, amazingly, gained the confidence of one of the gang's founders, who told him: ""At San Quentin, the herds [blacks] were getting out of hand and a bunch of old white bulls simply said 'Fuck this' and they decided to stand up...."" Fascinating white-knuckle tour of hell, brilliantly reported.