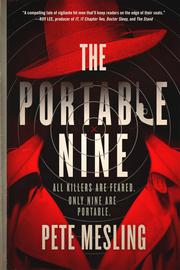 A reinvigorated gang of nine fearless yet curiously likable villains springs into action.

Mesling’s rousing thriller features a clever hit man named Davenport, known in underworld arenas as the “Mad Marksman of Malta.” Readers first meet Davenport in Florence, Italy, hard at work discreetly vanquishing international cargo negotiator Max Brindle. But this time, a rare mechanical malfunction occurs, and the hit on Brindle is botched, which sets in motion a series of deadly revenge plots. Meanwhile, crime syndicate figurehead Black Phantom, believing Brindle to be slaughtered, makes Davenport his target in a retaliation scheme that threatens the hit man’s family and ignites a vicious battle between the two men. In order to arm himself to the fullest extent, Davenport contacts a bevy of slick, vicious evildoers who are part of a group known as “The Portable Nine.” All of them exhibit unique monikers and lethal specialties. With the formation of this team of lawless underdogs, the author’s multifaceted story shifts into high gear. Chapter by chapter, Davenport’s deadly band is individually unveiled, each with distinctive details and personality quirks that keep the action popping and readers turning pages; there is nary a dull moment in this novel. These warriors, though most “likely to be out of shape and out of practice,” are urgently summoned after years apart and recruited back into action from the comfort of hiding places ranging from Los Angeles and the Midwest to the Australian Outback.

In this top-notch tale, Mesling takes great care to ensure the group is comprised of a formidable lot: not the average “workaday thug and cookie-cutter hit man” but a posse of “outcasts, criminals, egotists, and lunatics” sharing a unifying code of ethics. When gathered together, they form “a country unto themselves.” Alongside kingpin Davenport, the Nine include the hatchet-brandishing Butcher; fidgety Twitch Markham; the intimidating, business-minded Robin Varnesse; and brutal Chicagoan Miranda Gissing, a fierce fighter. They are joined by cunning former porn actress Lovinia Dulcet, who brandishes two Japanese steel skewers as her “Twin Delights” weapons of choice; Australian motorcyclist and macho man Abel Hazard, who surgically removed the fear center from his brain in order to become an audacious killer; and sightless Mr. Bonnet and his integral psychiatrist sidekick, Dr. Intaglio, who are sketchy spies for the Black Phantom and rejoin the others to infiltrate and leak intelligence. All fearless and mercilessly primed, the group is assembled by Davenport to help him put an end to the Black Phantom’s revenge plot to capture and exterminate the Nine (and a larger, associated terrorist scheme as well). Electronic trackers, blow darts, and a desert showdown provide the riveting conclusion while leaving the door ajar for further adventures now that the team has regrouped and dusted off its talents. The author keeps all his characters spinning, though some naturally dominate, right through the rather rushed but satisfying ending.

A creatively conceived, over-the-top thriller with plenty of room for more delicious treachery.