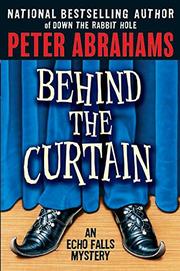 All is not well in Echo Falls: Thirteen-year-old amateur sleuth Ingrid Levin-Hill seems to be surrounded by people with secrets. Why is her father at home in the middle of the day? Why does her football-player brother suddenly have pimples all over his back? Who left the empty bottle of steroids in the tree house? Why has the new assistant soccer coach—coincidentally, the new VP at the company where her father works—taken out the coach with a viciously kicked ball? Why has the rich daughter of her father’s boss suddenly invited Ingrid over for a swim? Readers of Down the Rabbit Hole (2005) will see subplots introduced in the previous novel developed more fully here while at the same time being introduced to a new set of malefactors in a more tightly controlled plot. Ingrid herself remains the same wonderfully realized middle-schooler, equally drawn to her cantankerous outlaw Grampy and the upstanding Chief of Police Strade (and his son Joey). In a literature notoriously light on solid mysteries, Abrahams’s second outing for kids stands out as a deliciously plotted, highly satisfying adventure. (Fiction. 10-14)