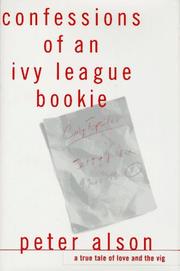 CONFESSIONS OF AN IVY LEAGUE BOOKIE

When he was 33, Harvard alumnus Alson was busted for bookmaking. His memoir is a diverting answer to the proverbial question: ``What's a nice boy like you doing in a place like this?'' Alson (a nephew of Norman Mailer's) was full of literary promise; his early Harvard stories were critically applauded. Later he spends a summer on the Cape trying to crank out a first novel. But he has writer's block. Unable to write, going nowhere in the relationship with his lover, Anna, and running out of money, Alson accepts a job offer from Michael, the son of a friend, who is making big bucks as a bookie and who is himself an alumnus of Brown. On Manhattan's St. Mark's Place, in a tenement apartment filled with cigarette butts and leftover takeout food, Alson enters the underworld. He learns about the odds, the ``line,'' the ``vigorish,'' the ``juice.'' He spends his days writing thousands of dollars in bets; he is surrounded by wads of cash and touched by greed. Slowly, he bonds with his screwed-up fellows in crime, the ``boys at the office'': Bob, the Monkey, Steak Knife, Pat, Bernie, Eddie, Spanky. Even as he battles guilt and fear, he begins to bring new bettors to the business and begins to make money; he becomes one of the boys. He teaches Bob about Anna Karenina and seeks wisdom from ``frog-throated'' Monkey. From Morrie Krause (whose apartment the bookies rent), an unwashed man who makes periodic entrances like Seinfeld's Kramer, he accepts a friendly Christmas gift, a videotape called Anal Agony. When finally the police smash through the office door, Alson goes to jail and, hour by hour, describes why doing time for even a night is enough to bring him back to his writing. As they say around Alphabet City, it takes what it takes. A good story, simply told and often affecting. (Author tour)