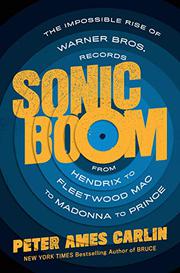 The Impossible Rise of Warner Bros. Records, From Hendrix to Fleetwood Mac to Madonna to Prince

The author of biographies of McCartney, Simon, and Springsteen delivers a fast-paced, overstuffed history of the storied record label.

In 1958, Warner Bros. Records began as a kind of joke, with records by pseudonymous artists and titles like But You’ve Never Heard Gershwin With Bongos. Jack Warner’s only rule was that “the company made money—and that nothing they released sounded anything like rock ’n’ roll.” Never mind that Elvis was the king of the charts. When Frank Sinatra took up with Reprise Records—whose name, writes Carlin hinted not just at the musical reprise but also at reprisal, “which appealed to Sinatra’s desire to exact revenge on Capitol Records”—the rule held until Mo Ostin and a handful of A&R men and producers seized the reins. Though Ostin’s guiding principle was “Let’s stop trying to make hit records,” everyone involved was won over by the success of a slate of 1960s acts, including the Grateful Dead, Neil Young, Frank Zappa, and Jimi Hendrix, for whom Ostin “offered a fifty-thousand-dollar contract for three albums, a pretty rich deal for an untested artist.” Pressing records became like minting money. In February 1973 alone, writes the author, “Of the sixteen albums Warner Bros. Records uncorked that month, ten of them had climbed onto Billboard’s best-selling album charts by April.” The good times continued long past the hippie heyday up until the era of MTV and video-friendly artists like Madonna. Alas, Ostin’s hands-off attitude, willingness to share the spoils, and demand for independence increasingly fell athwart of corporate executives as the record business conglomerated, with one particularly obnoxious corporate exec gloating, “We’re coming after all the cowboys.” Ostin and his cowboys rode off into a sunset that grows ever darker as the record business declines, but Carlin captures their glory days without sentimentality or untoward nostalgia.

Not as much fun as Almost Famous, but fans of LP–era rock will enjoy Carlin’s knowledgeable deep dive.