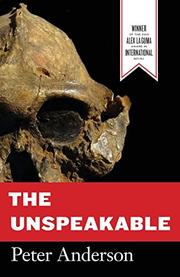 A debut novel details a betrayal in apartheid South Africa.

Anderson (Vanishing Ground: Poems, 2000) tells the tale of Adrian Erasmus, a man raised by his widower father, a drunken, racist Boer who eventually blows his brains out in front of his son due to an impossible debt. Adrian is shooting a video starring professor Digby Bamford. Although his reputation has faded, Bamford caused a sensation in the 1960s when he found a fossilized skull called Wonderboy, suggesting humans originated in South Africa. Also at the Wonderboy site are Bamford’s girlfriend, Vicky, once Adrian’s lover, and Adrian’s co-worker, a black South African known as Bucs. Complications develop as the foursome camps in the remote area. Adrian wants to rekindle his affair with Vicky, but she has her eye on Bucs; Adrian fantasizes about killing both men. When the booze-swilling Bamford proposes a porn shoot starring Vicky, Bucs, and Adrian, Bucs leaves and Adrian blows up the crew’s vehicle, creating a huge fire. Later Adrian finds Bamford dying from a gunshot wound that he claims is self-inflicted, but Adrian discovers that Vicky shot him. After witnessing South African soldiers tearing down a black family’s hut, he runs into a racist soldier who tells Adrian he and his comrades have captured and badly beaten the innocent Bucs while hunting for “terros”—terrorists. After Adrian lies, claiming Bucs killed Bamford and set the fire, the black man faces execution. This is a tautly written, finely crafted novel that plumbs the depths of racism, not only as it occurred in South Africa under apartheid, but by extension as it continues in much of the world today. Anderson has a golden ear for realistic dialogue, and his descriptive powers are strong (Bamford looks “like some flabby failure in a Mr. Universe contest”). Readers should not only see the characters, places, and situations the author describes, but smell, hear, and sometimes even feel them as well. Beyond painting a bleak portrait of the dissolute, decadent, and cruel nature of apartheid South Africa, “this bloody fascist country,” the book builds to a moral climax when Adrian has the chance to free his colleague. The only characters who come across as decent are the blacks, and they are relentlessly ground down by the whites.

An impressive tale, written in a sure-handed style, that vividly exposes the heavy personal and cultural costs of racism.