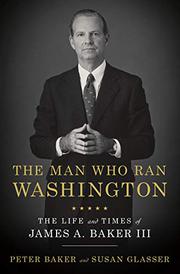 THE MAN WHO RAN WASHINGTON

The Life and Times of James A. Baker III

A penetrating portrait of a powerful Washington insider.

New York Times chief White House correspondent Baker and New Yorker staff writer Glasser bring political acumen and thorough research to their absorbing biography of James Addison Baker III (b. 1930), who served presidents Ford, Reagan, and both Bushes, decisively shaping American policies at home and abroad. Drawing on prodigious sources, including more than 210 interviews (70 hours with Baker), the authors offer a balanced view of a man praised for being pragmatic, scrupulously organized, and authoritative, and derided as manipulative, self-aggrandizing, and cynical. He habitually leaked information and “cunningly took credit for something he actually opposed in order to pocket a chit.” One political columnist noted, “taking responsibility isn’t Jim Baker’s style.” Born into an influential Texas family, he followed his father into corporate law, where he felt bored. In 1975, his longtime friend George H.W. Bush recommended him for undersecretary of commerce in Ford’s administration. His impressive political savvy led Ford to tap Baker to run his 1976 presidential campaign; although Ford lost to Jimmy Carter, Baker saw his own reputation rise. When Reagan took office in 1981, he made Baker his White House chief of staff. The authors portray Reagan as distracted and distant but also “a man of driving ambition and more calculation than his public image suggested.” Baker, too, was ambitious, and he could be ruthless in pursuing his goals. After running the White House, Baker became secretary of the treasury and, in George H.W. Bush’s administration, secretary of state. Although he spoke no foreign languages and had no international relations experience, he succeeded in helping to reunify Germany, organize a crucial Middle East peace conference, deal with the Iran-Contra scandal and Iraq’s incursion into Kuwait, and preside over the end of the Cold War. He later served as chief counsel for George W. Bush during the 2000 election recount. With Baker as their focus, the authors afford a sharp, insightful view into Washington dealmaking.

An engrossing biography that is highly relevant in today’s America.