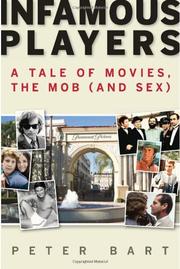 Bart recalls his tumultuous tenure as Vice President of Paramount, a once-proud studio struggling to adjust to changing audience tastes in the late sixties and seventies. Bart came to the picture business via an untraditional route—he had previously worked as a reporter for the New York Times—and his rise would be inextricably linked with that of Robert Evans, the famously brash and sybbaritic former apparel executive who had charmed his way into the Hollywood elite after an undistinguished acting career. Together, Bart and Evans, under the supervision of their voluable and impetuous corporate master, Charles Bluhdorn, would make Paramount an exemplar of the “new” Hollywood, championing innovative, era-defining projects including The Godfather, Chinatown, Rosemary’s Baby, and Love Story. It was a bumpy ride, and Bart drolly dishes on bad behavior both behind and in front of the camera, marveling at the ability of great cinema to survive the egos, private agendas, bad behavior, and appalling stupidity that run rampant in the highest echelons of the industry. Bart’s behind-the-scenes reminiscences of the productions of such legendary productions is insightful and endlessly diverting for any fan of the period’s films, and he limns the personalities and career arcs of such luminaries as Warren Beatty, Clint Eastwood, Robert Redford, and Francis Ford Coppola with a wealth juicy details and good humor. Infamous Players stands as a sort of cheeky, breezy companion to Peter Biskinds epic Easy Riders, Raging Bulls, which documents the same period…but Bart’s account is faster, more personal, and more fun.

An irresistible insider’s account of one of Hollywood’s most vital and storied eras.