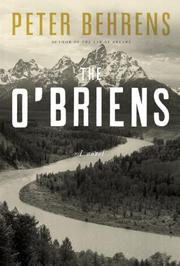 Spanning 60 years, this chronicle of an Irish-Canadian family is the second novel from the Canadian Behrens (The Law of Dreams, 2006).

It’s 1900, and the five O’Brien siblings are struggling to survive in barren rural Quebec. Their father has died fighting overseas; their sickly mother has married again, a wastrel. Everything depends on 13-year-old Joe, the oldest. When he learns their stepfather has been molesting his two sisters, he passes an early manhood test by stomping him half to death, then becomes a breadwinner (small logging jobs). At 17, his mother dies, and, needing room to grow, he heads West with brother Grattan, having parked the three youngest with nuns and Jesuits. Waiting for him there, though she doesn’t know it yet, is lovely Iseult, another refugee from the East, another orphan. She has bought herself a bungalow in Venice, Calif.; Grattan was the realtor. By now Joe is 25 and building a railroad in the Canadian Rockies. After a whirlwind courtship, they marry, the perfect couple, tempered by hardship yet ready for more risk. So far, so good; there are glimpses of the elemental in human nature. But then Behrens stops digging, becoming an observer of a marriage with the usual personal and historical markers. Babies: they lose one, keep three. Business booms, more construction projects after the railroad. Returning East, to Montreal. World War I. Grattan, a fighter pilot and decorated hero. Prohibition. Grattan bootlegging. Marital crisis; Iseult bolts. Reconciliation. World War II. Letters from the front. A son dies; a son-in-law survives. The jerky forward motion begs some profound questions, left unanswered.

Behrens is an effective storyteller, but his idiosyncratic vision is not yet fully formed.