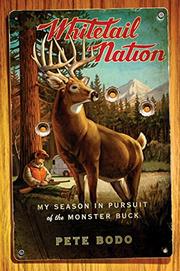 My Season in Pursuit of the Monster Buck

A seasoned hunter’s quest to bag the big buck.

In 2008, veteran sports journalist, biographer and senior Tennis magazine editor Bodo (The Trout Whisperers, 2006, etc.) set out on a two-month crusade to acquire what no prior hunting season had yielded: a “wallhanger.” Though having shot many fair-sized bucks in his decades of hunting whitetail deer, when the author hit 50, he resolved to up the ante. As bow season dawned in early October, Bodo’s pursuit took him from his upstate New York acreage to Pennsylvania, back to New York, on to northern Montana as Halloween neared, then down to the Texas hill country in early November, where a three-day escorted ranch hunt could cost up to $5,000. The author depicts the varied physical, ethical and psychological tests to which he subjected himself in hopes of tagging a record-worthy whitetail buck. A town sign he noticed in rural Montana—“WELCOME TO RUDYARD, 596 NICE PEOPLE AND ONE OLD SOREHEAD”—echoes the acerbic tone of much of Bodo’s rather hyperbolic commentary. Introspective but unapologetic, the author sheds light on the nature and allure of blood sports—“hunting isn’t about killing animals. So what is it? A few things, I thought…search for the connection with the old and honorable ways…a deeper understanding of the natural world…self-sufficiency and vestiges of the untamed”—while probing his own motives for engaging in this controversial hobby: “I bought the Weatherby .257 Mag Mark V for the same reason some middle-aged men buy a canary yellow Corvette convertible. Because it’s sexy, and looks great.” Though the uninitiated may eventually lose interest, deer hunters in particular will savor the level of detail Bodo includes in noting the equipment, tactics and techniques used in the field.

Frank and funny, one hunter’s attempt to take down the biggest monster of all—middle age.