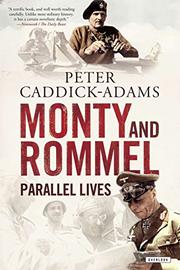 While heavy with military detail, Caddick-Adams’ dual biography manages to move fluidly between the events in the two great generals’ lives. Bernard Montgomery (1887–1976) and Erwin Rommel (1891–1944) both hailed from middle-class, nonmilitary families; received their “baptism by fire” during battle in World War I and were wounded; wrote tactical textbooks; and were instrumental in their respective countries’ battles during World War II in North Africa and Normandy. Though they never met, they shared a similar oppositional temperament in regards to their superiors. Both leaders were happiest on the front line. Rommel only lasted a year (1918) at the General Staff Corps, unlike most of Hitler’s later marshals, preferring to teach during the interwar years, and publishing his influential Infantry Attacks, in 1937. Montgomery trained fledging divisions in the Territorial Army, including six years in India. Rommel was put in charge of Hitler’s military escort in 1936, then a panzer division in the blitz of France in 1940. Though he had no armored experience, he was spectacularly successful, and again in North Africa. The Normandy invasion caught Rommel “tending his wife’s roses in the garden at Herrlingen,” while Montgomery led as the highly effective Allied land-force commander. Caddick-Adams emphasizes Rommel’s ethical behavior as a war commander, urging Hitler repeatedly to cede a “political situation” in the face of Armageddon, with fatal consequences to his own life. The author considers at length the postwar mythmaking regarding both generals.