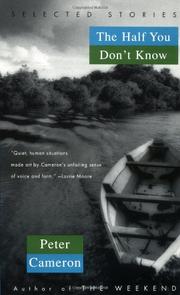 THE HALF YOU DON'T KNOW

It used to be that authors didn't gather what they considered to be the best of their short fiction together until the twilight of their career. Given the fact that Cameron is still relatively young and has published just two volumes of short fiction (One Way or Another, 1986, and Far-Flung, 1991), the need for a compilation (with the addition of two previously uncollected stories) seems decidedly unclear. The case isn't helped by the fact that these 19 stories, taken together, reveal a sameness of tone and a reliance on style over content. There's no question that Cameron is an elegant, precise stylist: His new novel, Andorra (p. 1482), exhibits a masterfully nuanced prose. In that work, and in some of the tales here, including ``Homework'' and ``Slowly,'' there's considerable intense emotion as well. Overall, though, the work in Cameron's first two collections isn't varied enough, in its characters, dramatic intentions, or settings, to require this ambitious repackaging. (Author tour)