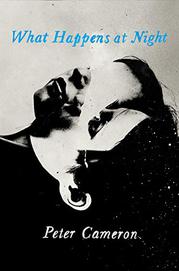 WHAT HAPPENS AT NIGHT

A snow-swept journey to the ends of the Earth continues Cameron's exploration of defamiliarized landscapes and the intricacies of human relationships.

A husband and wife arrive by train into the endless winter night of a mysterious Arctic region. The woman is dying of cancer; as her body erodes, her connection to—and patience for—her husband vanishes with it, but after suffering a succession of pregnancy losses throughout their marriage, she is determined to provide him with a family, a child, before she dies. They have come to the town of Borgarfjaroasysla (like Cameron's Andorra before it, a name that recalls a real place but which is released from the confines of reality through a reimagined geography and, in this case, a slightly different name) to claim a foundling at the local orphanage, the only place on Earth, given their age and the woman's failing health, that would agree to an adoption. They settle into the vast Borgarfjaroasysla Grand Imperial Hotel, bedecked in the antiquated opulence of a bygone era and, like the town around it, sparsely occupied but filled with eerie tensions. On their first night there, the man ventures down to the hotel bar, a dark, low-ceilinged burrow emanating a red glow through a glass-beaded curtain. Here, over snifters of the regional specialty, a curious liqueur made of lichen "tinged with the silvery blue glow that snow reflects at twilight," he meets a striking, eccentric old woman named Livia Pinheiro-Rima, who quickly assumes a role in the couple's life that's half meddlesome spirit, half fairy godmother. The next morning, rather than delivering them to the orphanage to meet their son, their taxi deposits them at the home of Brother Emmanuel, a renowned healer and the only draw for travelers to the town besides the orphanage, whom Livia has decided the woman needs more than she needs a baby. Having ferried his wife to this enchanted hinterland on the threshold of eternity, where life, nature, and time flow to a dilated rhythm and she embraces the metamorphosis that awaits her, the man emerges, ambivalently, at times reluctantly, into a transformation of his own.

A dreamy fable confronting love, death, and our inevitable inadequacy yet persistence in the face of both.