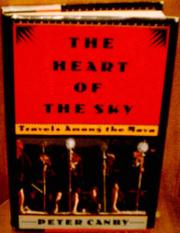 THE HEART OF THE SKY

Travel Among the Maya

Sincere but somewhat self-oriented accumulation of facts and impressions gathered during three years of wanderings among the Maya of Mexico and Central America; by former New Yorker editor Canby. A stranger in a strange land, Canby says that the purpose of his travels—and they were daunting, considering the 30-odd languages in use and other difficulties of access—was to understand the overall situation of the modern Maya, descendants of a sophisticated Mesoamerican civilization still holding fast to tradition after centuries of Spanish and Latino (mixed-blood) oppression. Beginning in the relative tranquility of southern Mexico, Canby found a sense of Maya otherness quickly surfacing when a first solo trip to a native village resulted in missed connections, misunderstandings, and a long walk at dusk back to the starting point. Fortunately, subsequent efforts proved more successful, including a visit to guerrilla country along the river border between Mexico and Guatemala with a French ecologist working for the Guatemalan government; explorations with gringo experts of temples and cities built during the classic Maya period (7th-8th centuries A.D.); and a number of observations based on participation in native rituals and ceremonies, including the Holy Week appearance of the old-man underworld god, Maxim¢n. Using scholarly texts for historical background and contemporary analysis, Canby evokes in colorful and sympathetic detail the remarkable story of a people's will to survive, but barriers between the Anglo and Maya worldviews remain largely intact, so the result of the author's trip is less a journey to the heart of the Maya than a mapping of its periphery. A patchwork of solid research and stirring images, but overly impressionistic and personal, and more frustrating than fulfilling. (Fifteen maps.)