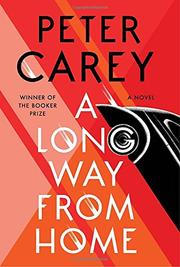 A LONG WAY FROM HOME

This picaresque comedy goes thematically deeper as it heads into the Outback.

The antic tone of this 14th novel by Australian-born Carey (Amnesia, 2015, etc.) belies its serious ambition. The comic spirit slyly suggests Shakespeare, an inquiry into identity and the farcical human existence. Chapters alternate through much of the novel between two narrators. The first is Irene Bobs, a tiny woman married to the equally diminutive Titch, though the accomplishments of both will loom large as the novel progresses. He is the best car salesman in their part of Australia. She is a demon driver, as she’ll show during the grueling Redex Trial, a contest of automobiles circling the continent that is intended to demonstrate their endurance rather than sheer speed. The second narrator is their taller neighbor, Willie Bachhuber, a teacher (or “a chalk-and-talker” in the novel’s parlance) and a minor celebrity as a game-show whiz. Willie is as reflective and remorseful as Irene is impulsive and resilient; even though the chapters never identify who is speaking, the difference in voice and perspective is evident. In order to launch his dealership, Titch places a big gamble on entering the Redex Trial, with Irene as driver (though she’ll never be given credit, as a woman in the 1950s) and Willie as navigator. Irene is skeptical over the prospect of “two hundred lunatics circumnavigating the continent of Australia, more than ten thousand miles over outback roads so rough they might crack your chassis clean in half.” But off they go! And off goes the novel in some surprising directions at which the setup barely hints, as it illuminates a country very different from the “monocultural” one upon which the government insists, discovers that racial identity may not be as simple as black and white, and upends the relationships between the married couple and their neighbor and the very notion of who is the novel’s protagonist and who is the sidekick.

In the guise of a period piece, Carey's novel raises issues of culture and race that carry a thoroughly contemporary charge.