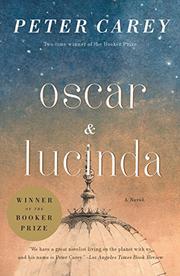 As he demonstrated in Bliss (1981) and Illywhacker (1985), Carey is partial to eccentrics. Here, he provides a splendid array of cranks and monomaniacs—with two of them, the title characters, living out an odd and tender love story. Yet theirs is only the central plot in an astonishingly complex literary performance that moves between England and Australia in the 1860's. There are dozens of characters and at least five important storylines, two set in the Old World and three in the New. Mostly, though, this is a leisurely and witty fable about the two great enthusiasms of the 19th century—religion and science. Many great schemes were hatched to try to harmonize the two, and so it is here. Lucinda, an Australian heiress, consults Joseph Paxton, architect of London's Crystal Palace, and then she and Oscar, a clergyman, set out to erect a glass church—in darkest New South Wales. The whole book is also a literary parody. Here, the results are uneven, largely because Carey has made some errant choices. His first targets are Fielding and Sterne. But these were 18th-century writers who expressed the energy of a particular moment: the last gasp of Merrie Olde England, about to be submerged by piety, industrialism, and red plush draperies with ball fringe. Carey is off the mark here. He fares better when he begins to parody Trollope. His style then becomes more appropriate to the material; also less facetious and digressive. Oscar and Lucinda (582 pp.) is sometimes too slow, and its energetic whimsicality can be grating. Against that, though, set writing that is far more often lucid and fine, beautifully drawn characters, and a remarkably clever narrative scheme. A brave and original novel.