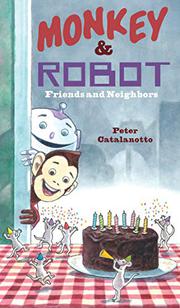 A third outing for friends Monkey and Robot spells all sorts of F-U-N.

Catalanotto continues the series’ usual formula: four stand-alone chapters peppered with the primate-machine odd couple’s antics. In the first chapter, Monkey asks Robot which day he was born. Robot says, “I was not born. I was built.” Since that “built-day” happens to be the next day, Monkey brainstorms aloud his wildest party ideas. Cake! Cookies! Balloons! Surprises! Despite Robot’s insistence that he doesn’t want to celebrate, Robot eventually goes along with the plan—and maybe even feels as special as Monkey wants him to. Other chapters cover a visit from an “ex-gladiator” (translation: exterminator), a birdsitting accident involving the neighbor’s parakeet, and a giggly, messy human baby. Though all four chapters practically bounce with silliness, there’s an overall groundedness that supports the overarching “I can fix it” theme. Black-and-white illustrations carry the text’s simple dialogue and occasional narration from panel to panel. On average, there are three or four panels per page. The few human side characters show some diversity in skin tone. Clothed, anthropomorphic Monkey’s childlike innocence and curiosity are spot-on—if a bit too human for pure comfort. One notable scene touches briefly on transracial adoption when Monkey asks why mother Tina, who presents white, looks different from baby Zhen, who is Chinese.

As delightful as any of the bounteous, monkey-filled books out there.