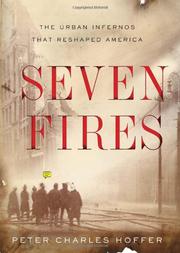 The Urban Infernos That Reshaped America

Scholarly recounting of America’s most catastrophic urban disasters, from the tipped-over lantern that set colonial Boston ablaze in 1760 to the flames that erupted when terrorist-piloted airliners slammed into the World Trade Center.

Hoffer (History/Univ. of Georgia; Past Imperfect, 2004, etc.) is as much interested in the causes and effects of the fires as in the blazes themselves. His inclination for historical detail and academic analysis often bogs down the narrative in a blizzard of digressions, statistics and footnotes. The frequently wooden, inert prose doesn’t help; portions of the text read like a committee report. Elsewhere, however, the narrative is more compelling, especially when Hoffer embellishes the history with anecdotal detail. He tracks the origin of Pittsburgh’s famous 1845 fire to an Irish washwoman who left a kettle untended, then explains why the city’s insurance companies promptly went bankrupt (gross under-funding). He blames Chicago’s 1871 blaze not on Mrs. O’Leary’s cow, but on two careless youngsters who stopped in her barn for a smoke. He describes dramatically the heroic last stand by 37 fire companies from Baltimore, New York and Washington that saved what was left of Baltimore from the fire of 1904. Heroes and villains abound as the story moves to more modern times. During the four hellish days of arson and looting that nearly destroyed Detroit in 1967, firefighters dodged sniper bullets to doggedly extinguish the multiplying fires. When wildfires tore through the stately homes lining the hillsides above Oakland in 1991, volunteers and desperate homeowners joined overworked California firefighters to contain the blaze. The book’s high point is Hoffer’s examination of the World Trade Center attack, which couples numerous tales of bravery on the part of rescue workers with some well-researched observations on how more lives might have been saved. Fires can never be completely prevented, the author acknowledges, but their effects can be ameliorated by proper planning.

Timely and thoughtful, if not always well told.