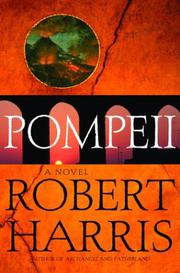 A straight-arrow Imperial Roman hydraulic engineer on assignment in Naples plumbs into the corruption of the waterworks as Vesuvius begins to rumble.

How do you breathe life into a 2,000-year-old catastrophe? If you’re the thoroughly capable British novelist-journalist-columnist Harris (Archangel, 1999, etc.), you conjure up an unassuming but utterly trustworthy civil engineer, Marcus Attilius Primus, have the Emperor send him from Rome to the steamy south to fill the mysteriously vacated shoes of the longtime overseer of the Aqua Augusta, the local water supply, throw him up against embedded proto-Mafia corruption, bring in real-life polymath admiral Pliny the Elder, stir up a pen of man-eating eels, sketch a long-legged lass about to be wed to one of her criminal father’s tame politicians, and steam everything in sulfurous vapors of the continent’s great sleeping volcano. Although they may be in Imperial drag, Harris’s slaves, masters, bureaucrats, and soldiers move through the streets of Pompeii, a pretty little city on the make, like . . . well . . . Italians. And who ever would have thought the ins and outs of an aqueduct would work to knit everything together? Engineering may be geeky to some, but you’ve got to respect a public work that works, bringing water over arches and through tunnels hundreds of miles from the mountains to greater Naples, where it plashes through fountains and baths. But the water has suddenly stopped west of the Pompeii junction. Did Attilius’ predecessor skimp on the maintenance? Hard to say since nobody will talk about him. And just what did nouveau superrich ex-slave Numerius Popidius Ampliatus, proud owner of a garish villa next to Pliny’s naval base, have to do with the water supply that feeds his fancy fish farm? And how did he make that fortune in little old Pompeii? And why is the ground steaming? And that wine glass—it’s trembling.

Fast, fact-filled, and quite fun. A blast, really.


IF YOU LOVE THIS MOVIE, YOU SHOULD READ THAT BOOK (10 READING RECOMMENDATIONS BASED ON BEST PICTURE WINNERS):

DO THE WINDOWS OPEN?
by Julie Hecht
Nonfiction

THE SEARCHERS
by Glenn Frankel
Nonfiction

AN OFFICER AND A SPY
by Robert Harris
Fiction

THE GHOST
by Robert Harris

EMPRESS OF THE SEVEN HILLS
by Kate Quinn
Nonfiction

A VILLA FAR FROM ROME
by Sheila Finch
Newsletter sign-up