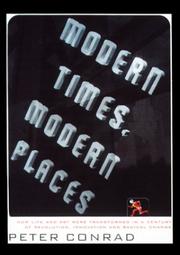 A sweeping, ambitious examination of sea changes in human perception and interpretation over the past 100 years, from Oxford professor Conrad (A Song of Love and Death: The Meaning of Opera, 1987, etc.). The author admits that his account heavily favors the first half of the 20th century. Although the thematically organized chapters march in roughly chronological order, in many, Conrad devotes dozens of pages to an artistic trend as played out in pre- WWII decades, then tacks on a few paragraphs zipping us through its manifestations in the postwar years. His essential subject is the assault of high modernism on the received wisdoms of the past. As he depicts our century’s most daring painters, writers, composers, architects, and directors (abetted by their peers in science and apocalyptic politics) challenging conventional notions about the representation and even the essential nature of physical, social, and psychological reality, two central points emerge. Abstraction, Conrad suggests in his most interesting passages, is not just an artistic strategy, but a response to the increasingly abstract nature of modern life, experienced at an accelerating pace and accessorized with ever more complex technologies as disorienting as they are indispensable. His second principal theme—the loss of individual identity within the urban crowd, totalitarian political movements, and consumerist mass culture’seems more clichÇd. Indeed, there isn—t much new material here, as Conrad rounds up the usual artistic suspects (surrealism, dadaism, cubism, serialism, atonalism: name your favorite, and you—ll find it) and takes readers to such oft-visited sites as turn-of-the-century Vienna, Moscow in the rosy 1920s heyday of Soviet idealism, and 1990s Tokyo, paragon of the ersatz, virtual-reality world we now inhabit. Nonetheless, he capably integrates massive amounts of information into a smoothly entertaining chronicle. Scholars may regret the lack of original insights, but this accomplished and very thorough round-up of our century’s most important cultural trends is perfect for the serious general reader. (166 illustrations, not seen)