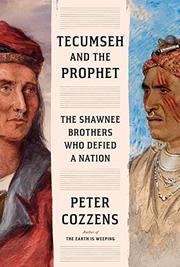 TECUMSEH AND THE PROPHET

The Shawnee Brothers Who Defied a Nation

A comprehensive biography of the noted Native American leader and his overlooked brother.

William Henry Harrison, whose forces defeated Tecumseh at the Battle of Tippecanoe, held his opponent in such high esteem that he said, “If it were not for the vicinity of the United States, he would, perhaps, be the founder of an empire that would rival in glory that of Mexico or Peru.” As it was, writes historian Cozzens, Tecumseh forged a powerful alliance of Native peoples in the area from Wisconsin to Ohio that attempted to contain white expansion into the region. Tecumseh took many of his “pan-Indian” cues from the Ottawa war leader Pontiac and the Delaware prophet Neolin, both of whom led resistances against British incursions a generation before him. Important in this struggle was Tecumseh’s younger brother Tenskwatawa, called the “Shawnee prophet,” whom some historians—Cozzens calls out Alvin Josephy, author of The Patriot Chiefs (1961) and other works—have depicted as a “delusional charlatan.” Surely Tenskwatawa had his difficulties: He lived in his brother’s shadow, and he battled alcoholism. Yet the accomplishments of the brothers in uniting sometimes-contending Native tribes into a formidable army were the makings of a legend. It was their misfortune that the Shawnee people inhabited the “fault line between French and British interests, and as such was fated to become an imperial battleground.” Matters would grow worse with the War of 1812, when Tecumseh found an imperial ally in Britain but was killed on a battlefield in Canada—for which Harrison took undue credit. For various reasons, writes Cozzens, in the aftermath, Tenskwatawa “had fallen mightily in the fragmented Indian world that he and Tecumseh had striven to unite,” and after unsuccessful attempts to negotiate reservation land in the East, he ended his days in a small settlement of refugees that became known as Shawnee Mission, Kansas.

Blending historical fact with solid storytelling, Cozzens delivers a nuanced study of the great warrior and his times.