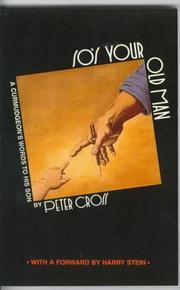 A Curmudgeon's Words to His Son

A graphic artist by profession and a contrary grouch by avocation, Cross proffers a decade-long journal of fatherly love and advice for his son, started with the boy's birth when he was pushing 43. (Cross's friend Harry Stein contributes a foreword.) The wry testament is addressed as much to posterity in general as to the author's progeny in particular. Son Max is treated to graphic details of his birth, some of his father's family history, and, mostly, Dad's opinion of the world (it is populated largely by ``assholes,'' in his view). Hormones loom large as topic of discussion. Lawyers and New Jersey, those evergreen butts of the near-clever, take their lumps. According to Cross, Washington, D.C., is ``where the bad guys live,'' and the Vatican isn't such a great place, either. What is missing from this mix of stream-of- self-consciousness and vagrant thoughts is a kind word about Max's mother. Divorce is foreshadowed from the first in the veiled complaints to the toddler about his mom. But, then, the cross Mr. Cross doesn't have much good to say about his own father, either. The author's advice to Max runs along the banal lines of ``Challenge authority'' and ``Kick ass.'' It's just about as straightforward as that and quite readable. But the author's self- aggrandizement is ever-present, even in the proud confessions of error and even in his description of a bout of clinical depression. Some parental advice is tainted by the author's apparent satisfaction with himself, warts and all. The fine qualities of son Max, though, are beyond cavil. Max, meet Dad. He's got an attitude, but it seems he loves you even more than he loves himself.