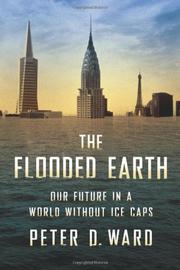 Our Future in a World Without Ice Caps

NASA astrobiologist Ward (Biology and Earth and Space Science/Univ. of Washington; Under a Green Sky: Global Warming, the Mass Extinctions of the Past, and What They Can Tell Us About Our Future, 2007, etc.) describes the disastrous changes that can be expected as sea levels continue their accelerating rise due to global warming. Drawing on recent studies, the author writes that there will be massive flooding—far more than currently predicted—of world coastlines, home to more than 200 million people. In one of many scenarios, Ward predicts conditions in Miami in 2120, where a ten-foot rise in sea level has left behind a bankrupt island city without municipal freshwater, freeway and railroad ties or much of a middle class (most having fled to higher ground), its dying economy based mainly on illegal drugs. “All of the coastal cities can die by drowning,” he writes, noting that flooding will destroy the infrastructure needed for survival. “If we do not act, none will be spared, even those that climb up hills onto steeper slopes, such as San Francisco, Rio de Janeiro, and Vancouver.” Ward examines each aspect of the havoc-making process: increasing greenhouse-gas emissions, rising temperatures, melting of the large ice sheets and glaciers in Greenland and Antarctica and a foreseeable sea-level rise of more than 200 feet over centuries. The biggest culprit behind rising seas, he writes, is overpopulation. Most vulnerable to drowning and economic calamity are coastal places at low sea levels in Holland, Bangladesh and more than 30 other countries, and the most likely to emerge as greater world powers are cold places like Russia and Canada. Ward writes that coastal cities have three choices: do little or nothing (and be inundated), build flood-control facilities and dikes or relocate populations to entirely new cities. More broadly, to avoid disastrous global warming, humans must not only reduce greenhouse gases; they must change behaviors (stop using coal, eliminate the suburbs and private vehicles) and engineer new climate-protecting techniques (artificial cloud cover, space reflectors, etc.).