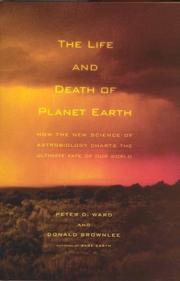 THE LIFE AND DEATH OF PLANET EARTH

Geologist Ward and astronomer Brownlee combine disciplines to tell us how the world will end.

On the cosmological time scale, point out the authors of Rare Earth (not reviewed), we are living in a brief, pampered interval during which our planet offers a comfortable environment for living things. The opening chapters concisely survey how geology and astronomy jointly regulate the climate of our world. The rise of complex life was the result of several very fortunate developments: the emergence of land, the establishment of an atmosphere, and in particular the presence of a liquid ocean. Once life arose, it spread to fill the planet and has survived for nearly half a billion years. But the current temperate era is only a respite between ice ages, which bring glaciers sweeping irresistibly down from the poles to cover a large fraction of the planet's land surface. That alone will put human civilization under unprecedented stress—and there's worse to come. In the longer run, Ward and Brownlee predict, the continents will slide together to create one super-continent with interior climate not unlike Death Valley. A runaway greenhouse effect will kill off first the green plants, then almost all animal life. (Simple organisms may survive much longer.) Even that is only a prelude to the ultimate catastrophe, when the sun itself swells to become a red giant, turning the remnants of earth to a cinder. The authors too quickly shift from solid scientific fact to their own extrapolations, and their prose is neither as clear nor as graceful as it might be. Still, anyone who wants to see just how the cards are stacked ought to be reading this.

Far from cheerful, but fascinating.