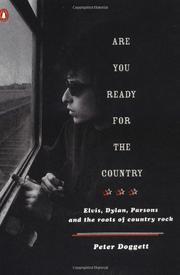 ARE YOU READY FOR THE COUNTRY

Elvis, Dylan, Parsons and the Roots of Country Rock

An informative and analytical look at the ongoing dysfunctional relationship between country music and rock ’n’ roll.

Early rock by Chuck Berry, the Everly Brothers, and virtually every artist at Sun Records had country roots, and there were numerous instances of country tunes becoming pop successes. But the country-music establishment faced a perennial dilemma: should it remain true to its traditional hillbilly roots, or change in order to be more marketable? Movements such as the Nashville Sound, engineered primarily by influential (and recently deceased) guitarist/producer Chet Atkins, created music that satisfied the country market without alienating urban pop listeners. Then a growing country-rock community took shape in the 1960s, and when Bob Dylan issued his Nashville Skyline album and appeared on The Johnny Cash Show in 1969, the hybrid of musical styles entered the American mainstream. The journey of country-rock from Nashville to California, from Texas to Great Britain, is painstakingly and admirably traced by Doggett, former editor of Record Collector magazine, who gives proper credit to such obvious trailblazers as the Flying Burrito Brothers, The Byrds, and Gram Parsons, as well as to less heralded musicians like ex-Monkee Michael Nesmith, Chris Hillman, and Gene Clark. Country-rock’s identity crisis has continued for decades. Artists who tried to be progressive were often faced by a backlash, and for every crossover success, there would be rumblings for a counterculture. Doggett’s text is marred somewhat by his tendency to jump from one time period to another in an attempt to acknowledge a trend or movement, but by identifying as many contributors as possible, he demonstrates that “identity is less a matter of what you are than what you are perceived to be.” A list of 100 recommended country-rock albums appears at the end.

Music lovers, and particularly those who abhor the fragmentation of the music business, will enjoy this intelligent study. (20 pages b&w photos, not seen)