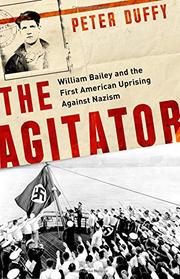 William Bailey and the First American Uprising Against Nazism

A biography of an important 20th-century activist who was one of the first to stand up to “the well-publicized injustices of the Third Reich.”

The subject of Duffy’s (Double Agent: The First Hero of World War II and How the FBI Outwitted and Destroyed a Nazi Spy Ring, 2014, etc.) latest is Bill Bailey (1915-1995), a merchant seaman with little formal education who joined the American Communist Party as a teenager and became increasingly angry about the U.S. government appeasing Hitler during his rise to power and subsequent comprehensive repression of any form of dissent. Bailey’s fleeting fame occurred when he and a few like-minded Nazi haters boarded the Bremen, “the flagship of Hitler’s commercial armada,” in New York Harbor in 1935. A dress-up party was in progress to celebrate the departure of the massive ship. Bailey and his colleagues had devised a plan to scale the mast and remove the Nazi flag, which featured a swastika. The plan succeeded, becoming “the first blow landed against the Third Reich by foreign adversaries, delivered without guns or bomb, years before America, or any country, chose to take military action against a regime that was already signaling its treacherous intentions.” However, local authorities, feeling duty-bound to protect a foreign vessel against politically oriented trespassers, arrested Bailey and a few accomplices. Throughout the narrative, Duffy offers detailed sections about the Bremen and its impressive luxury, the duties of merchant mariners, the American Communist Party, Hitler’s rise, the German persecution of Jews, and the failure of most Americans—including President Franklin Roosevelt—to counteract the evils of Nazism in the early 1930s. In addition, the author critiques the criminal justice system as he provides detailed coverage of the trial that resulted in the acquittals of Bailey and his colleagues. After the acquittal, Bailey remained a political activist, union organizer, and merchant mariner, serving in World War II. For the last few decades of his life, he remained out of the spotlight.

A well-fleshed-out biography featuring an appropriate amount of historical context.