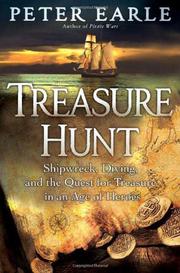 Shipwreck, Diving, and the Quest for Treasure in the Age of Heroes

British historian Earle (The Sack of Panama: Captain Morgan and the Battle for the Caribbean, 2007, etc.) delves into the late-17th-century surge in treasure hunting and the diving technology that accompanied it.

Shipwrecks were all too common in this age of primitive navigation, when vessels frequently collided with reefs, rocks or the coast. Scavengers focused particularly on the routes traversed by riches-laden Spanish galleons as they sailed from the Americas to the mother country. British strongholds Jamaica and Bermuda were the sites of such fantastic Spanish shipwrecks as the Maravillas and the Concepción. The latter, reported to be carrying four million pesos worth of treasure when it sank off the Bahamas, was unearthed in a spectacular 1683 salvage by Boston sea captain William Phips (under permission of the British crown). Unearthed after only two days of searching by four divers, the find made Phips rich and famous. It sparked an epidemic of treasure fever, in particular among those hoping to find Spanish silver in the wrecks from the 1588 Armada off the coast of Ireland. Earle chronicles many of these mostly failed endeavors, including quixotic schemes by Thomas Neale, Richard Long and Collin Hunter, as well as the various attempts to repossess scattered treasure from the fleet of Spanish galleons wrecked in Vigo Bay. Among the numerous innovations in diving equipment that also fueled treasure-seeking mania in the last decade of the 17th century were the diving tub, the sea crab, the diving bell invented by astronomer Edmond Halley and the pump system fashioned by the Braithwaite family. However, Earle’s focus is limited; except for brief mentions of Jules Verne’s work and the recovered logbooks of William Evans, he largely ignores the rich tradition in literature and the arts sparked by treasure hunters.

Thorough, but too restricted in scope to appeal to general readers.