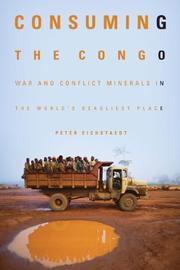 War and Conflict Minerals in the World's Deadliest Place

Once again, a journalist familiar with African politics, economics and culture tells a shocking story of widespread corruption, greed and bloody violence, this time in a region rich in tin and coltan, minerals used in the manufacture electronic devices.

As Africa Editor for the Institute for War & Peace Reporting at The Hague, Eichstaedt (Pirate State: Inside Terrorism at Sea, 2010; etc.) traveled around the eastern Congo giving workshops to train local journalists and talking to militia leaders, former child soldiers, businessmen, aid workers and victims. A two-chapter side journey into neighboring Sudan, which seems rather out-of-place here, demonstrates that ethnic rivalries and fighting over a country’s resources is not unique to the Congo. However, the eastern Congo has become “the rape capital of the world”—and, with more than five million dead in the last decade, the site of “the deadliest human catastrophe since World War II.” Eichstaedt’s reporting reveals in grim detail how rival ethnic militias and the national Congolese army fight for control over the region’s rich mines, how villagers are routinely slain with guns or machetes or by being burned alive, how pick-and-shovel miners are heavily taxed by unpaid soldiers and how rape has become a tactic of war. In their own words, his interviewees often provide unrealistic solutions to their predicament or show a calm acceptance of the chaos and violence around them. The answer, writes the author, is not simply a ban on “conflict minerals” as was recently instituted by the United States, or peace-keeping efforts by the United Nations; it must come from the Congolese people demanding responsible government. Eichstaedt does not offer much hope that it will happen soon.

The welter of unfamiliar names of places, organizations and people makes for slow reading (maps and a cast of characters would have helped), but the main stumbling block for many will be the sheer horror and hopelessness of it all.