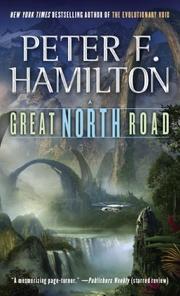 Part murder mystery, part alien-contact thriller, Hamilton’s latest doorstopper (The Evolutionary Void, 2010, etc.) takes place in the early 23rd century when, thanks to the invention of wormhole technology, distant planets have been discovered and colonized.

On St. Libra, a world of advanced plants but curiously no animals, not even insects, huge “bioil” farms produce the gasoline that, pumped via wormhole to Newcastle-Upon-Tyne in northeast England, feeds Earth’s insatiable appetite for petroleum products. Instrumental in all this is the powerful North family, three generations of clones whose original three clone brothers have developed a friendly rivalry. Predictably, then, when the corpse of a North is found floating in the River Tyne, the Norths and other powers that be take a strong and immediate interest. Capable detective Sidney Hurst doesn’t want the case—he can’t stand the politics, and this figures to be nothing but. Yet, there are intriguing aspects: The North cannot be identified, and nobody admits to having mislaid one; and the murder method is—almost unique. Twenty years ago on St. Libra, another North clone and his entire household were slaughtered by the same grisly means. The convicted murderer, Angela Tramelo, who was working in the house as a prostitute, protested her innocence. Problem was, she claimed the killer was an alien monster. So now, Sidney confronts the possibility that a monster is loose in his city. Meanwhile, a military expedition is hurriedly organized and sent to St. Libra with Angela (who’s by no means as innocent as she seems) aboard, but it runs into terrifying complications. Hamilton’s development proceeds in familiar fashion: complicated but well-articulated plotting, life-sized main characters, intriguing extrapolation, plenty of crisp action and padding—via barely relevant subplots, long chunks of scene-setting and bizarrely verbose introductions to bit players that even regulars will skim or skip.

One of Hamilton’s better outings, caveats and all.