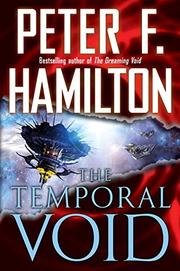 Readers—at least, those with prodigious memories—will recall that the black-hole-like Void now threatens to engulf the galaxy, its dramatically accelerated expansion caused by the heightened psychic activities of Edeard, the Waterwalker, as he battles gangsters and private armies inside the Void. Billions of humans, followers of the Living Dream cult, hope to join him in the Void, where everybody has psychic powers. But the alien Raiel are blockading the Void with huge warships; worse, the alien Ocisen have sent a battle fleet to threaten Earth. Various factions within ANA, the cyberspace composed of billions of uploaded minds that now runs Earth, are fighting openly. Elsewhere, since the Dreamers are key to penetrating the Void, the enigmatic cyborg Aaron has captured Inigo, the First Dreamer, though even Aaron himself doesn't know why; Araminta, the Second Dreamer, somehow eludes numerous pursuers; and near the end we learn there's a Third Dreamer. Fortunately the characters, always a Hamilton strength, remain as distinctive as ever, as what seems like dozens of other subplots—involving mysterious agents, treacherous plotters, superpowered psychotics, autistic physicists, holdovers from yarns prior to the current trilogy and what-all—chug merrily along without resolving anything.

Huge and, particularly in the case of Edeard's saga, much flabbier than its predecessor, but still addictive enough that fans will stick around for the conclusion.