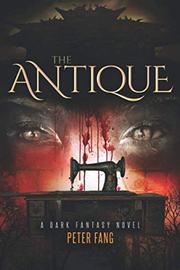 A pair of sisters gets caught up in the centuries-old machinations of a Chinese witch in this debut horror fantasy.

Almost 2,000 years ago in China, a witch named Zi-Ling is wrongfully accused of the murder of a warlord’s son. Before she is burned, she curses the warlord and the onlookers in the crowd—as well as all of their descendants. Her ashes are divided into six magic boxes and spread throughout the various Chinese kingdoms. But the witch’s spirit remains and requests that her sister reunite the boxes of ashes so that she may be reincarnated. Over the course of the centuries, Zi-Ling—or the queen, as she styles herself—uses her influence from beyond the grave to track down all but two of the boxes, increasing her power and bringing her closer to a new life. The tale resumes in modern America, where Elise and Maria Wang are growing up in Seattle under their parents’ abusive discipline. The girls realize at a young age that they can read each other’s minds, but after a bizarre and traumatic incident that leads to the deaths of their parents, the two are separated and raised apart. Their unusual powers grow through their adolescence—perhaps because they are Blood Children, descendants of Zi-Ling’s family who are pure enough that she can possess them and force them to hunt for her ashes. Unfortunately for Elise and Maria, the queen—who often takes the form of a creepy old sewing machine—has decided that only one Blood Child can be allowed to live. Fang’s prose is textured and often unsettling, particularly when describing the necromantic powers wielded by the queen and her servants. Here, a homeless girl is targeted: “Something in her pushed her forward; that something inside of her skull was gnawing her at the root of her neck. Strange and unfamiliar voices pounded her head, and panic swelled inside. She pulled her hair, hoping the pain would stop the voices.” The novel takes a long time to get started, and there are a number of scenes and sections that could have been left on the cutting-room floor. That said, the author’s blend of Chinese folklore with modern horror makes for a compelling combination, and those looking for a high-stakes tale of magic and mayhem will likely walk away pleased.

A gripping, if sometimes turgid, work of sinister speculative fiction.