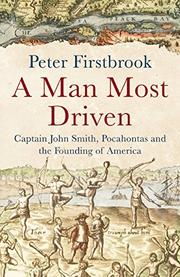 A MAN MOST DRIVEN

Captain John Smith, Pocahontas and the Founding of America

A nuanced account of the English captain saved by Pocahontas reveals an astonishingly complicated personality.

Former BBC producer Firstbrook (The Obamas: The Untold Story of an African Family, 2011, etc.) finds in the roguish, quarrelsome, fearless adventurer Capt. John Smith a sterling example of the tenacious early-American character. Before the 27-year-old Smith ever came to Virginia to make his fortune in 1607, he proved himself an ambitious knight-errant, as he later recounted in his autobiography and elsewhere. A Lincolnshire tenant farmer’s son, Smith wanted to find adventure rather than inherit the family farm when his father died, so he became a mercenary sailor fighting the Spanish, making connections to better himself and filling the gaps in his education. His adventures took him across the continent, from Spain to Austria-Hungary, where he enlisted to fight against the incursions of the Ottoman Empire, battling duels to the death and even being taken captive and enslaved by the Turks. Having escaped and returned to London, he ingratiated himself with British merchants hoping to capitalize on the recent discoveries in the New World, such as the ill-fated Roanoke Colony of Virginia, sponsored by Sir Walter Raleigh. Resentful of the aristocrats in control of the London Company–funded expedition, Smith managed to get locked up for mutinous behavior during the trip out, and only his much-needed skills as a soldier and farmer kept him from being hanged once they arrived in Jamestown. Firstbrook gives Smith the benefit of the doubt in his account of being saved from the Powhatans’ chopping block by chief Wahunsenacawh’s favorite daughter, Pocahontas—as befits an intrepid leader who was fiercely committed to the New World effort and instrumental in its survival over the first two murderous winters.