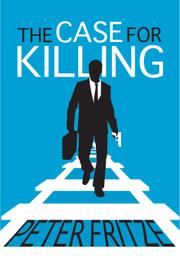 THE CASE FOR KILLING

In Fritze’s debut legal thriller, the undiplomatic actions of an antitrust lawyer in Toronto may result in murder—namely his own.

Someone wants to see attorney Peter Bradley dead. Cryptic journal entries, revealed only to the reader, detail an unknown party’s animosity for Bradley, but there’s certainly no shortage of people with motives for murder. Walter, a member of Bradley’s antitrust group at his firm, keeps getting passed over for partnership; Bradley’s wife, Amy, is on a short financial leash; and his brother-in-law, Reggie, a struggling musician, doesn’t appreciate how his sister is being treated. But Bradley has problems of a different sort: Managing partners have pushed Tony, whom Bradley hates, to be his successor as the group’s chair; Bradley’s uncovered discrepancies in his bank account; and he learns that Amy is frequenting Maximus, a swingers club. If Bradley has any hope of overcoming his odds, he’ll have to straighten quite a few things out—as long as someone doesn’t straighten him out first. This mystery doesn’t let up; the identity of the journal writer is neither revealed early nor blatantly obvious. In fact, the potential murderer seems of sound mind, debating both the legal and psychological ramifications of killing Bradley. It’s Bradley who’s off-kilter, obsessively watching his wife, who openly flirts with his colleagues, and eventually concocting a plan that’s just as dangerous as the diarist’s but much more methodical. Fritze’s strongest scenes aren’t ones of violence (though there are several of those) but manipulation: Bradley meets with Tony and fakes elation about the attorney joining the firm; Amy pretends to dote on her husband so that he’ll log onto his bank’s website, giving her a chance to learn his password. A school of red herrings is expected to accompany a cast this large, but the author successfully wraps up a good number of them. He further develops the lead character with a full back story: His first wife died, and he had an abusive, alcoholic father.

A slight variation on the whodunit—a whomightdoit—but with all the trimmings of a satisfyingly complex murder mystery.