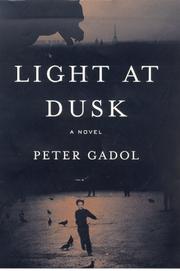 Will Law has quit the American foreign service after, tragically, going too far out on a limb in his Mexican posting. Seven years after their breakup, he writes his ex-lover Pedro in Paris that he’d like to see him again. Pedro, the narrator, is an art historian focusing on French architecture. He and Will spend their first three days together in bed, then go out into a bread riot backed by the ultra-rightist French Front, which wants the immigrant laws reversed—and more white Gallic babies for voting purposes. Will’s father was a top FS officer, and one of Dad’s friends has gone to great trouble to get Will reinstated in the service, with a new posting in Jakarta, but he’d be a spy. Gadol’s (The Long Rain, 1997, etc.) backgrounding in FS adds much to Will’s weight on the page. Before Will can back out of the new assignment, he meets an American, Jorie Cole, and Nico, the four-year-old son of her Lebanese lover, now in Nigeria. The skinheads from the French Front have been doing dastardly things to dark-skinned immigrants, and, as Jorie stands talking with Will, some chain-wielding skinhead terrorists swoop down on Nico and kidnap him. All kids who have earlier been kidnapped, as the French police know, eventually have been returned unharmed. As an American, Jorie is especially disillusioned about raising Nico in France, where, despite being born there, he’s not a citizen, is subjected to racial slurs daily, and has almost no rights. Will helps her through the police questioning and tries to save Nico. One good act helping Jorie recover Nico, Will thinks, will turn his life around after his Mexican fiasco. Success will, however, have its fatal demands.

Strongly written in language gray as a Paris rainfall, with moral ambiguities heavy as mist.